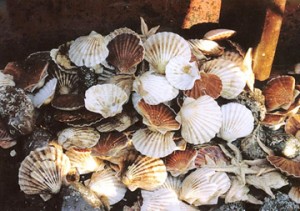 Trade Distribution has completed its preparations and is all set for this year’s queenie season after completing a refurbishment of the refrigerated cold storage facility at our main UK office in Skelmersdale.

Queen scallops, also known as ‘Queenies’ are found in abundance in the sea around the Isle of Man. The Queenies are unique in that they are the only seafood product in the British Isles to hold protected designation of origin (PDO) status. This means that they recognised as being traditionally produced, prepared and processed in its entirety, within a specific region; resulting in a unique and distinctive flavour; in the same way as Parma ham and Melton Mowbray pork pies have protected status.

The fishing season for queenie scallops runs from June to October and Port Erin will be a hive of activity in preparation of handling over 1,000 tonnes of the shellfish that will be caught over the period.

UK-caught queenies are in great demand abroad, particularly in French, Spanish and Italian markets. Trade Distribution plays an integral role for its shellfish processing clients, such as CB Horne and the major fish processor in the North of England; in ensuring that the scallops remain in a temperature controlled environment from while being transported from island to the UK and markets across Europe.

Trade Distribution’s refrigerated vehicles are stationed dockside, ready to load the shellfish straight off fishing boats and into the temperature controlled vehicles, keeping them fresh and full of flavour. The seafood is then delivered straight out to markets or held in our cold storage facilities in Skelmersdale ready to be distributed across the UK and Europe, as requested by our client’s customers’.

Trade Distribution Managing Director, Steve Pickett said “As a leader in ambient, chilled, frozen food and drinks logistics we want to stay at the forefront of the industry. The upgrading of our 300 pallet cold storage facility is aimed at increasing our operational performance levels for processes such as loading and order picking. In addition to this we are also focused on making the supply chain greener and are continually looking at ways to increase sustainability.”

Some Of Our Clients